While many people have slight differences in the length of one leg compared to the other, a significant difference between the two legs can cause problems. Leg length discrepancies can disturb the way a person walks, how his or her spine lines up and strain hip joints. 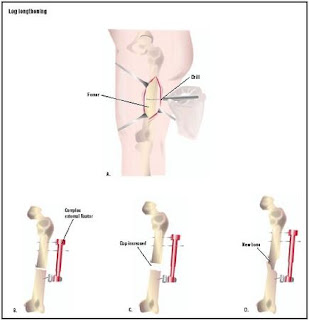 The causes of LLD may be divided into those that shorten a limb versus those that lengthen a limb, or they may be classified as affecting the length versus the rate of growth in a limb. For example, a fracture that heals poorly may shorten a leg slightly, but does not affect its growth rate. Radiation, on the other hand, can affect a leg's long-term ability to expand, but does not acutely affect its length. Causes that shorten the leg are more common than those that lengthen it and include congenital growth deficiencies (seen in hemiatrophy and skeletal dysplasias ), infections that infiltrate the epiphysis (e.g. osteomyelitis ), tumors, fractures that occur through the growth plate or have overriding ends, Legg-Calve-Perthes disease, slipped capital femoral epiphysis (SCFE), and radiation. Lengthening can result from unique conditions, such as hemihypertrophy , in which one or more structures on one side of the body become larger than the other side, vascular malformations or tumors (such as hemangioma ), which cause blood flow on one side to exceed that of the other, Wilm's tumor (of the kidney), septic arthritis, healed fractures, or orthopaedic surgery. Leg length discrepancy may arise from a problem in almost any portion of the femur or tibia. For example, fractures can occur at virtually all levels of the two bones. Fractures or other problems of the fibula do not lead to LLD, as long as the more central, weight-bearing tibia is unaffected. Because many cases of LLD are due to decreased rate of growth, the femoral or tibial epiphyses are commonly affected regions.

As patients develop LLD, they will naturally and even unknowingly attempt to compensate for the difference between their two legs by either bending the longer leg excessively or standing on the toes of the short leg. When walking, they are forced to step down on one side and thrust upwards on the other side, which leads to a gait pattern with an abnormal up and down motion. For many patients, especially adolescents, the appearance of their gait may be more personally troublesome than any symptoms that arise or any true functional deficiency. Over time, standing on one's toes can create a contracture at the ankle, in which the calf muscle becomes abnormally contracted, a condition that can help an LLD patient with walking, but may later require surgical repair. If substantial enough, LLD left untreated can contribute to other serious orthopaedic problems, such as degenerative arthritis, scoliosis, or lower back pain. However, with proper treatment, children with leg length discrepancy generally do quite well, without lingering functional or cosmetic deficiencies.

On standing examination one iliac crest may be higher/lower than the other. However a physiotherapist, osteopath or chiropractor will examine the LLD in prone or supine position and measure it, confirming the diagnosis of structural (or functional) LLD. The LLD should be measured using bony fixed points. X-Ray should be taken in a standing position. The osteopath, physiotherapist or chiropractor will look at femoral head & acetabulum, knee joints, ankle joints.

Treatment depends on what limb has the deformity and the amount of deformity present. For example, there may be loss of function of the leg or arm. Cosmetic issues may also be a concern for the patient and their family. If there are problems with the arms, the goal is to improve the appearance and function of the arm. Treatment of leg problems try to correct the deformity that may cause arthritis as the child gets older. If the problem is leg length, where the legs are not "equal," the goal is equalization (making the legs the same length). Treatment may include the use of adaptive devices, prosthesis, orthotics or shoe lifts. If the problem is more severe and not treatable with these methods, then surgery may be necessary.

Bone growth restriction (epiphysiodesis) The objective of this surgical procedure is to slow down growth in the longer leg. During surgery, doctors alter the growth plate of the bone in the longer leg by inserting a small plate or staples. This slows down growth, allowing the shorter leg to catch up over time. Your child may spend a night in the hospital after this procedure or go home the same day. Doctors may place a knee brace on the leg for a few days. It typically takes 2 to 3 months for the leg to heal completely. An alternative approach involves lengthening the shorter bone. We are more likely to recommend this approach if your child is on the short side of the height spectrum.
« Everything It Is Best To Understand Abo… Mortons Neuroma Overview »
Profile

Login to quote this blog

You cannot quote because this article is private.